In a growing global market with increasing consumption and increasing waste, environmental impact is becoming an important design consideration in footwear design for 2 reasons.

1. Footwear is difficult to recycle because of its secure construction which makes separating its different material components very difficult.

2. Synthetic/plastic components usually need 700 years before they begin to decompose. Some say plastic never fully decomposes, it only goes through a process of photo degradation where it breaks down into smaller and smaller pieces. Pieces that are eaten by fish and birds as our pollution penetrates deeper into ecosystems worldwide. Plastics also contain chemicals that leach into waterways, not only polluting but also increasing the risk of diseases.

So in theory instead of 1000 years, a Brooks BioMoGo midsole would be broken down in 20 years. Not only that, but instead of breaking down into smaller pieces, the midsole would instead be eaten by anaerobic bacteria.

This is how it works; the midsole contains a proprietary additive made up from a blend of organic materials that does not modify the base EVA midsole material to which it is added. This additive, I believe called EcoPure® is a produced and owned by Bio-Tec Environmental and it essentially causes the plastic to be an attractive food source to certain soil microbes, encouraging the plastic to be quickly consumed and processed into methane.

But because the consumption process relies on a biologically active landfill with high moisture content and because EcoPure® is tested using 20% to 30% solids content instead of the 55% to 65% solids content of a typical landfill, it’s unclear how quickly the BioMoGo midsole would be consumed by the microbes in the real world (the driest landfills contain 95% solids waste!).

On a positive note though, a landfill  with 20% to 30% solids content produces greater amounts of methane. Methane which can be collected by “Bioreactor” landfills and burnt to create electricity! So in theory with the right disposal of plastics containing EcoPure®, it would be possible to produce valuable electricity. Below you can see the process in greater detail. 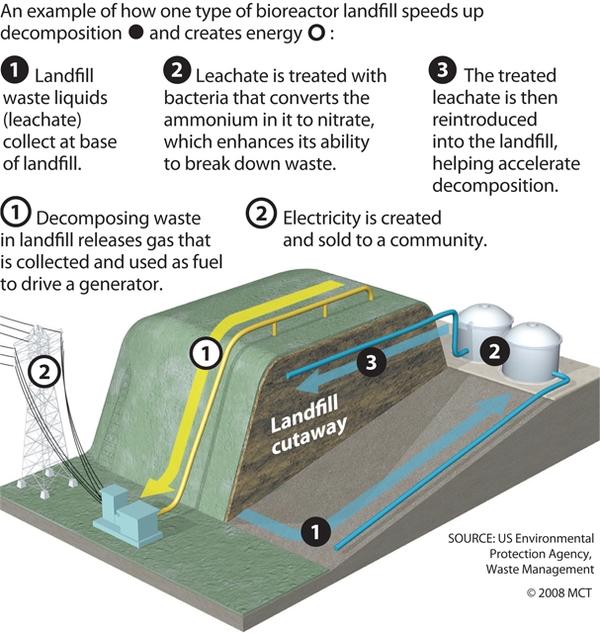 Other synthetic leather and textile companies are also developing methods to use additives such as EcoPure® in their materials.

Maybe one day footwear athletic footwear will not only decompose, but also create methane as a by-product to provide us with electricity.

EcoPure® can be used by any company, so if you are a designer look it up.

The Brooks BioMoGo FAQs webpage has this and more to say about BioMoGO :-

How does a BioMoGo shoe break down in a landfill?

BioMoGo works by enhancing the biodegradation of the midsole once it enters an active enclosed landfill. As soon as the midsole encounters the “triple convergence” of high microbial load, low oxygen, and adequate moisture, it begins to break down into its component nutrients. This makes the carbon that was locked up in the original petroleum available for plants and animals to use for growth. Early on this breakdown can be seen under high magnification as the following pictures show:

While shoes with traditional Ethylene Vinyl Acetate™ (EVA) midsoles can last up to 1,000 years in a landfill, Brooks shoes with BioMoGo will biodegrade 50 times faster in an active enclosed landfill.

Does the promise of BioMoGo’s biodegradation in landfill conditions really matter?

The answer, in short:

Landfills typically contain enough moisture and provide a morphologically and metabolically diverse environment to allow biodegradation to occur (Palmisano and Barlaz, Microbiology of Solid Waste 1996, p. 11; Archer and Peck 1989). Studies of landfill leachates have also shown the presence of a metabolically diverse anaerobic microbial flora (Beeman and Suflita 1987) in sufficient amounts to actively mineralize polymeric food sources (Barlaz et al.1992). This is demonstrated in practice by the waste gas trapping systems that all landfills include, which wouldn’t be required if biodegradation were not readily occurring (Ham et al. 1979). Research suggesting the contrary focused solely on an older landfill in an arid climate (Denison, Rathje, and Murphy 1992).

Some authors have questioned whether anaerobic degradation in a landfill is a good thing and whether saving landfill space is a reasonable selling point for landfill biodegradative products (Denison). By adding an anaerobic pro-degradant to BioMoGo, landfill gases are not increased; the rate of production is merely enhanced so that collecting the gases becomes economically feasible. New, permitted landfills must feature biogas collection devices, and as early as 1992, more than 119 of the largest landfills in North America already had these systems (Palmisano and Barlaz 1996). Under revisions to the Clean Air Act, the USEPA required large landfills in the U.S. to capture all landfill gases, and by 2005 there were 396 operational landfill gas projects nationwide. In the European Union (especially Germany and Italy), governments offer large subsidies for energy generated from biogas.

Studies of landfill leachates have shown leachates are highly reduced (Beeman and Suflita 1987; Christensen et al. 1994) due to active methanogenic biodegradation and thus do not contribute to the mobility of metals if any leakage were to occur. Leachate strength is also reduced through active anaerobic biodegradation, lowering the risk of groundwater contamination and treatment costs (Barlaz 1996).