Posted by Markus on September 18, 2013
Posted in: Bicycles, Design Theory. Leave a comment

Small bicycles are interesting because they challenge a traditional convention of proportions. Traditional proportions that sometimes limit the creative potential of any design.

Wide tires and big bicycle frames can be seen everywhere, especially on mountain and fixed gear bikes. But since we’ve come to appreciate smaller cars like the VW Golf, or the Mini, can we also be drawn to small bicycles? 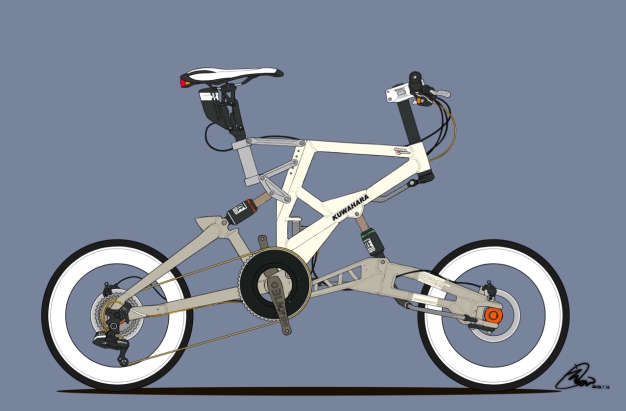 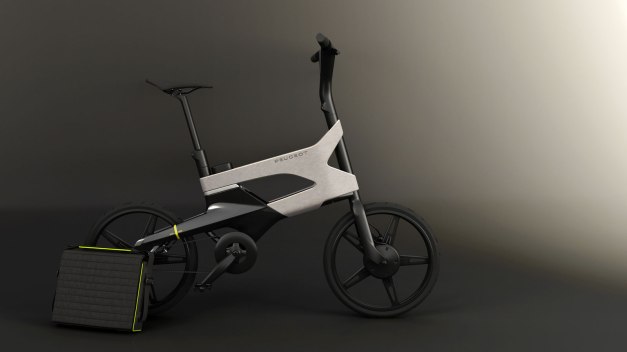 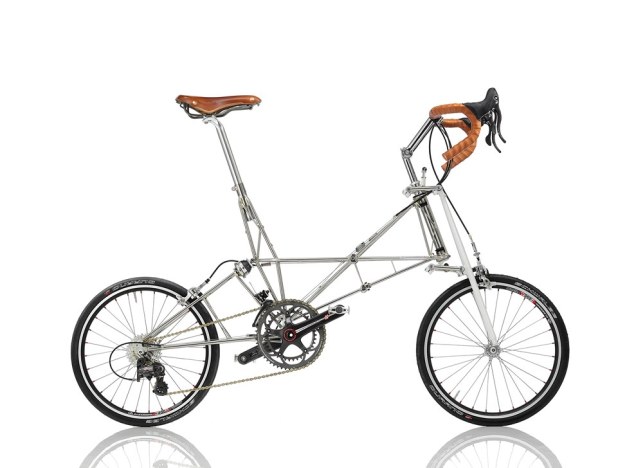 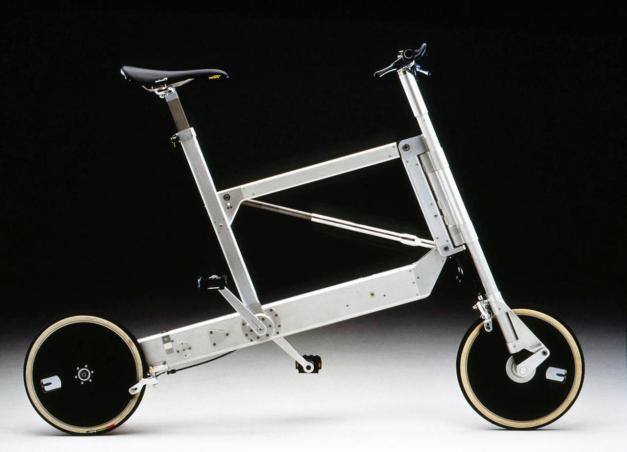 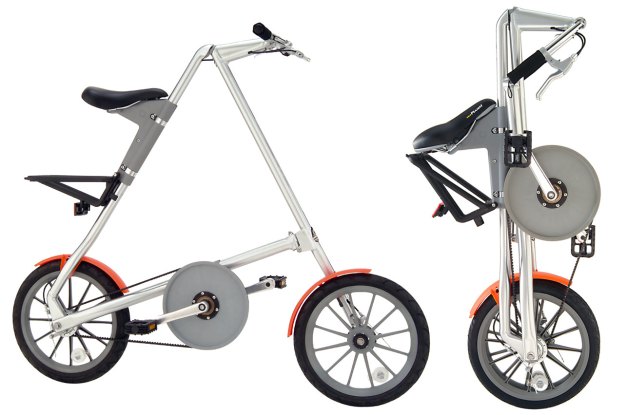 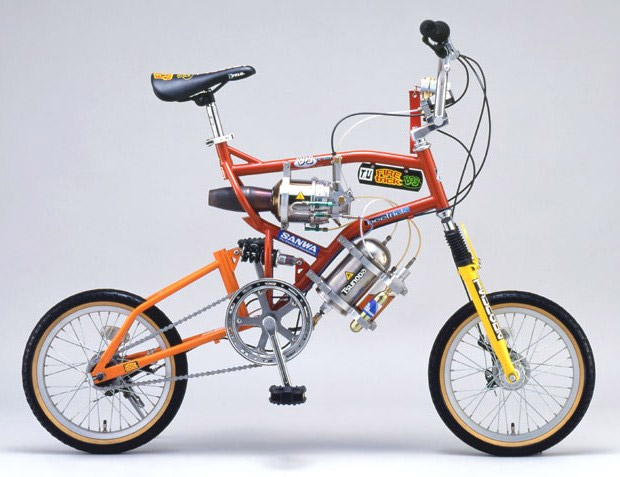 The Invention of a New Sport – Creating with Passion and Fun

How is a sport invented?

As part of both the skateboarding wave of the 1980’s (I was also that barefoot skater) and the kiteboarding wave of the 2000’s, I’ve been privileged to experience firsthand the development of new sports that have brought about new cultural perspectives and re-energized entire industries. Creating new products and demand.

Experiences that opened my mind to radical new concepts and a vision that anything positive is possible with enough passion.

Its thrilling to think what the cycling world has become since the introduction of Mountain Bikes by a small group a back country cyclists. 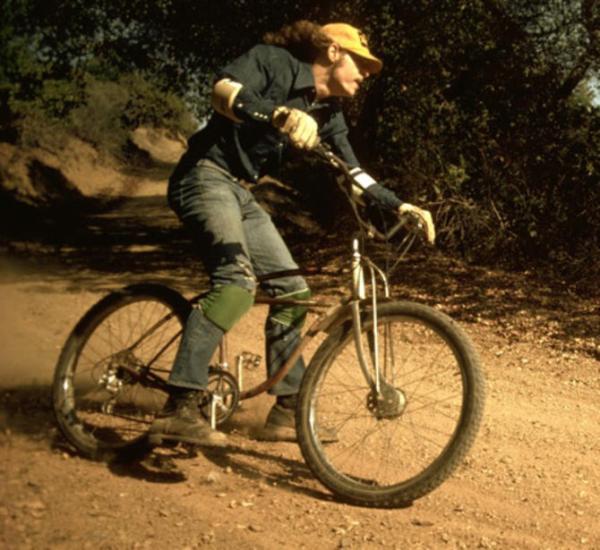 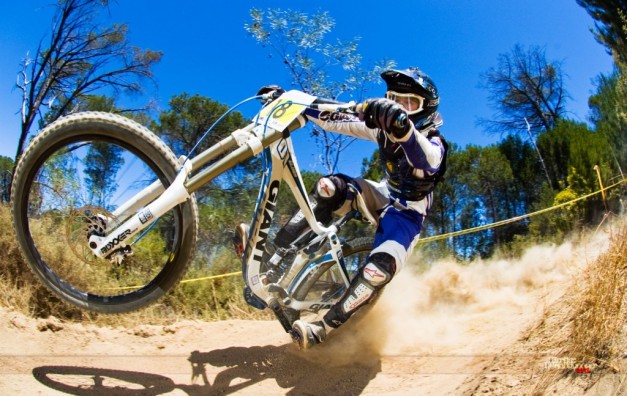 The Sneaker world with Skateboarding. 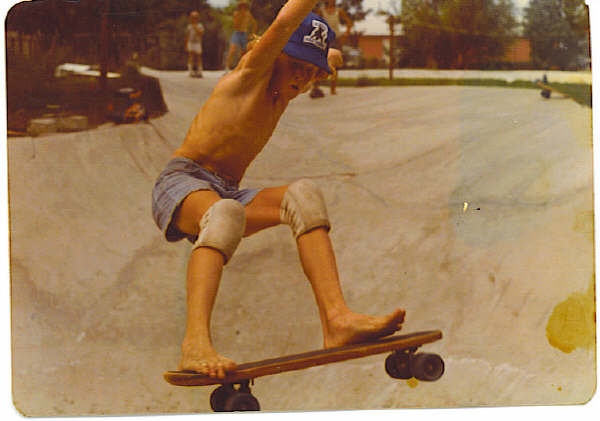 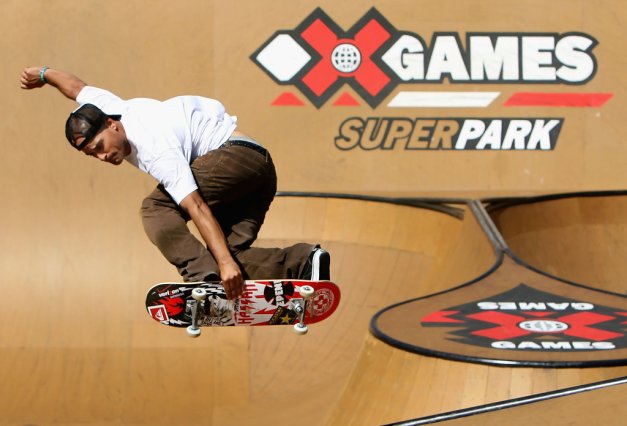 The Sailing world with Kitesurfing. 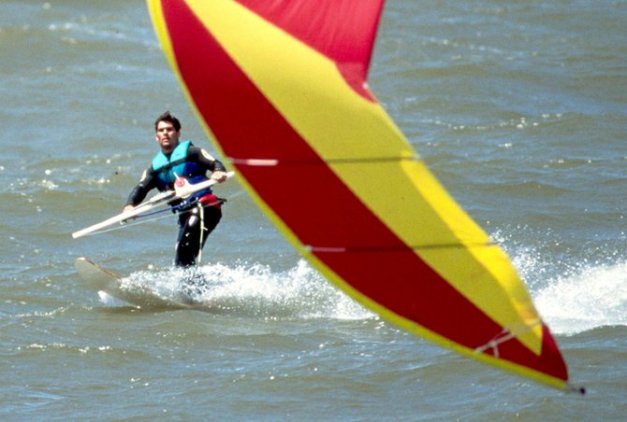 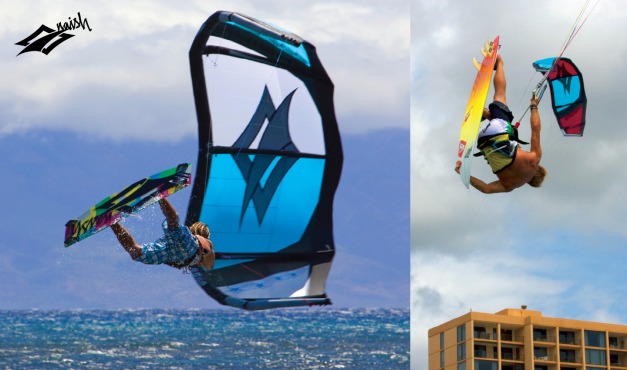 But how did these sports even begin?

Below are a few videos about the origins of some of the biggest and newest sports and some of the exceptional and lucky individuals that made it all happen.

Interviews capturing some of the pioneers of each sport, their inspiring character and passion to pursue their odd visions and create a great new sport, cobbling it out of virtually nothing but a few spare parts.

These short movies contain so much positive energy and fun that they make you want to go out and rip, bike, skate, or surf.

But they also make you wonder if you could invent a sport specifically tailored to your passions what would it be?

That’s one privilege that designers have, that is be part of emerging sport/design movements, tasked to invent new products with new functions and for new uses.

From the moment we’re born, no material besides food and drink has a closer more intimate relationship with man than textile.

We spend our whole lives cocooned in textiles, they keep us warm, they keep us cool, they allow our skin to breath and they enhance the identities we create.

Posted by Markus on April 17, 2012
Posted in: Architecture, Bicycles, Environmental Intelligence, From and Surface. Leave a comment

Dror Peleg’s bike design is made up of snap together, injection molded, recycled plastic components. 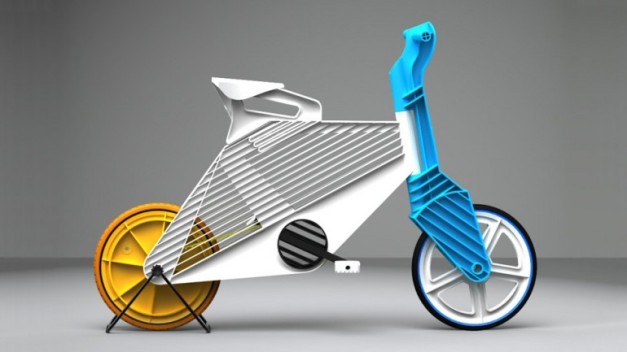 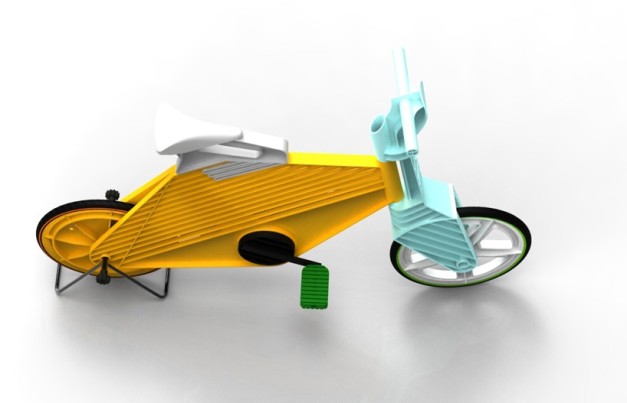 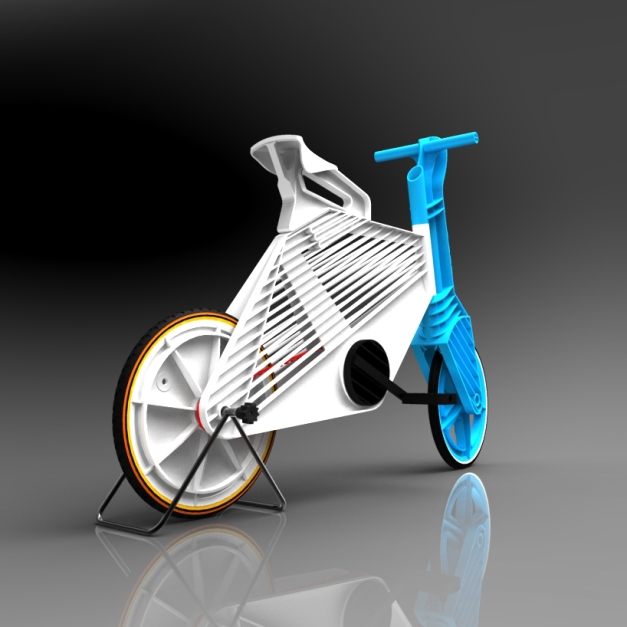 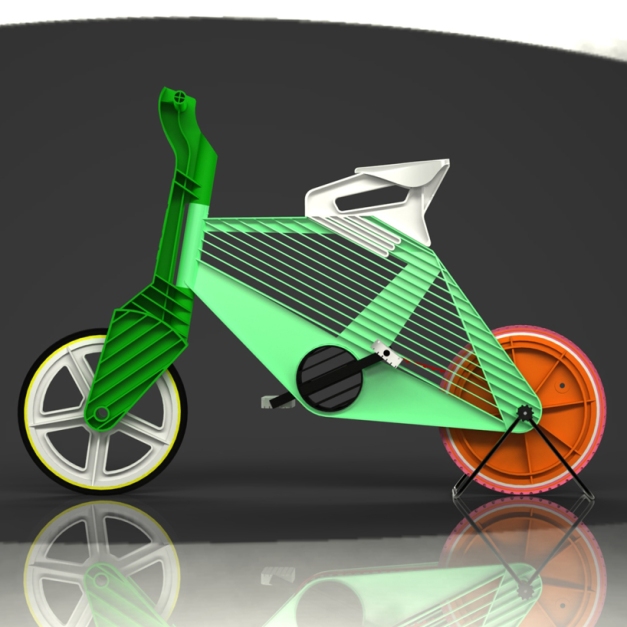 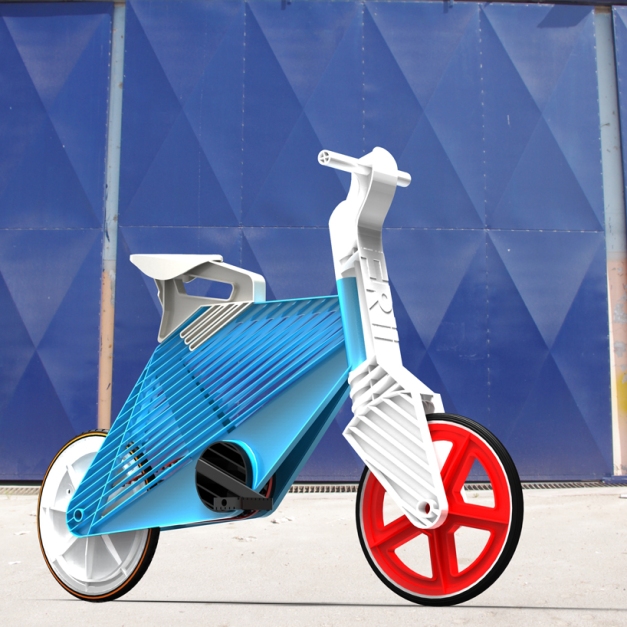 Posted by Markus on March 30, 2012
Posted in: Bicycles, Environmental Intelligence, From and Surface. Leave a comment

“Is creativity all about aesthetics and shapes these days? What happened to creative problem solving and the idea of making our lives better? What about design as a guide when exploring future possibilities? Great styling won’t help.” – Semcon Design

Following Opel’s unoriginal design philosophy “sculptural artistry meets German precision” (in the wake of Mercedes-Benz’s “design is art” philosophy), with its boomerang design cues, Opel’s RAD electric bicycle was designed to be merchandized alongside the Ampera and the RAK e experimental electric vehicle. 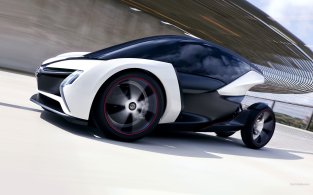 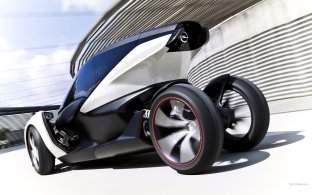 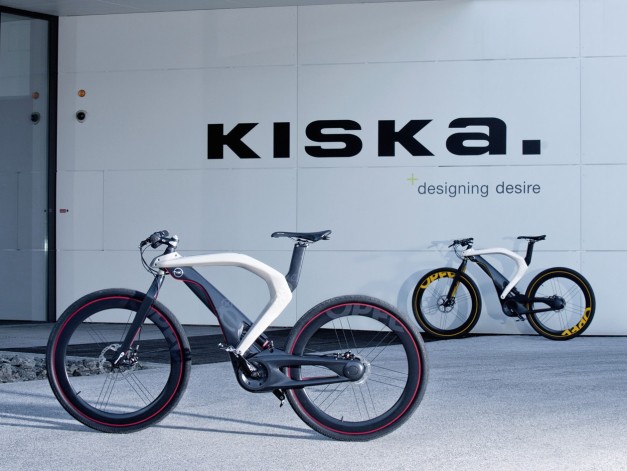 Some really nice development sketches, with the typically excellent explorations of form expected by Kiska Design. 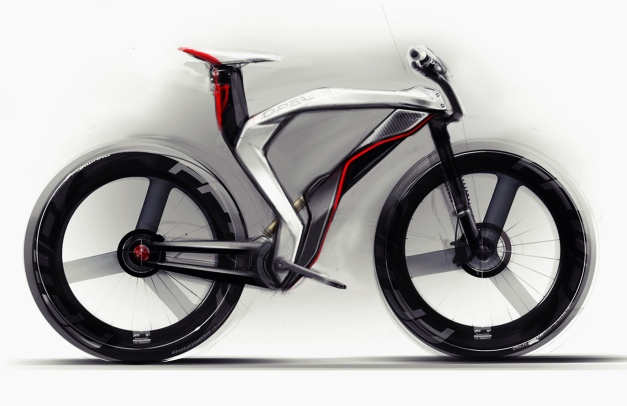 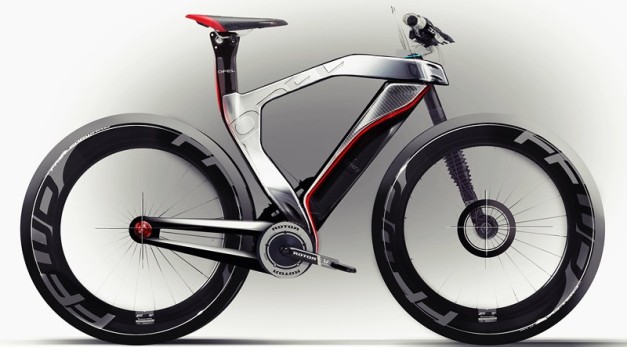 But in its final execution the RAD looks a bit cluttered and plastic like a toy.

Although the design appears strongly inspired by Down Hill, Hydroformed frame high performance mountain bikes like the GT Fury, I think it’s design should have better reflected a non athletic urban environment and Opel consumer (who probably isn’t into down hill mountain biking). I also think the form language could have been cleaner considering both it’s automotive design roots and it’s hollow-pressed steel frame (designed around automotive manufacturing mass production methods).

Maybe the steel frame could look metallic, or more automotive both in form and surface finish, like a freshly beaten car panel? Or even Opel’s 1928 Silver Motoclub 500 motorbike, which also had pressed-steel frame elements.

Because motorbikes have visual design cues different from bicycles, can an e-Bike also be designed to have its own distinct design language? This aspect was for me another missed design opportunity on the RAD project.

What an evolved e-Bike design and aesthetic will be like, remains an exciting prospect. 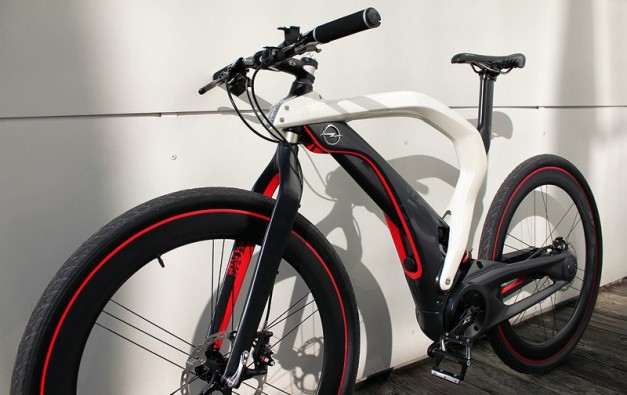 The integrated headlight is a good car cue. 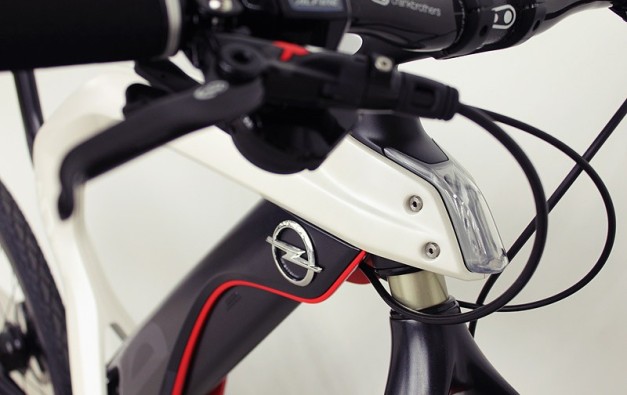 That the RAD can be charged while being transported in the car is a neat idea, but the promises of state-of-the art technology and a range of 60-145 km seems a bit vague and university project like. 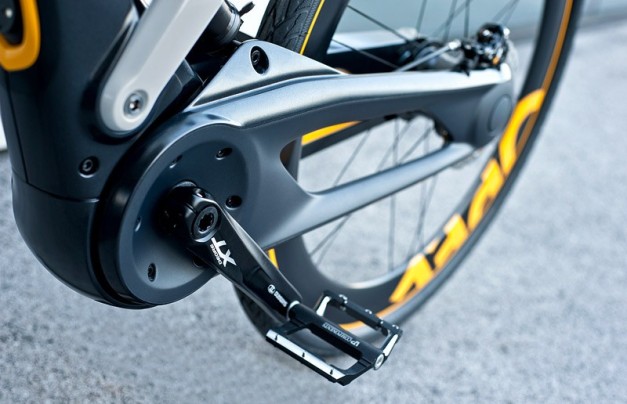 If only the technology were as bold as the styling, if only she was as foxy as her looks suggested. I guess all remains to be seen, the jury on the Opel RAD is still out.

In the meantime enjoy the design details while sipping your morning coffee.